When a gas field in Pennsylvania tripled production from around 500 MMSCFD to 1,500 MMSCFD, water in the pipe network started to overwhelm the existing water cyclone separators and 'trip out' the compressors.

Typically a 'slug catcher' section of pipe is installed in a gas pipeline to slow down the velocity of the gas and allow all the liquid water to drop out of the gas flow, but in this case, the existing 'slug catcher ' was unable to cope with the increased flow rate.

SAS was called in by the plant operators and used CFD to analyze actual performance of the existing 'slug catcher'. SAS' findings confirmed it to be operating at only 20% efficiency.

Working closely with its client, SAS followed an  iterative process and developed an optimal modification to the existing 'slug catcher' that gave a water removal efficiency rate of greater than 90%. 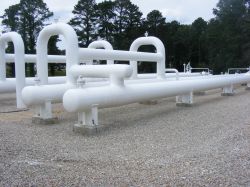 This meant that the substantial cost of designing, fabricating and installing a brand new 'slug catcher' could be avoided.

Commenting on the project, Kevin M. Robinson of Kinder Morgan Gas Pipelines said, "The revised slug catcher is performing exactly as intended and captured all the liquids without any carry-over onto the station scrubbers or unit scrubbers."